The narrow fertile strip of alluvial soil on the banks of river Nile flowing through the desert, which made agriculture possible that resulted in the development of towns & settlements on the eastern bank of the river. Egyptians built their pyramids & tomb structures on the western bank. The Nile river also served as a route of transport & communication.

Egypt had limestone in the north, sandstone in the central region & granite in the south. The gigantic scale of Egyptian architecture was mainly possible due to the Egyptian methods of quarrying, transporting & raising enormous blocks of stone to position. Sun-dried & kiln burnt bricks made from Nile mud & chopped straw were used for palaces & houses, while stone was used for pyramids & temples.

Egypt has a warm, sunny climate with very little rainfall that has led to the preservation of its ancient buildings. Since sufficient light reached the interiors through doors & roof slits, Egyptian architecture is characterized by the absence of windows. The absence of rain also resulted in the use of flat roof with thick stone slabs.

The belief in life after death made the Egyptians to build numerous tomb-houses & pyramids for the preservation of the dead.

The Pharaoh, who was considered to be the descendant of the sun god. Social life is graphically depicted in the wall sculptures of tombs. Slave labor is written all over the monuments of Egypt with the priests enjoying an exalted position in society.

Use of symbolic motifs: 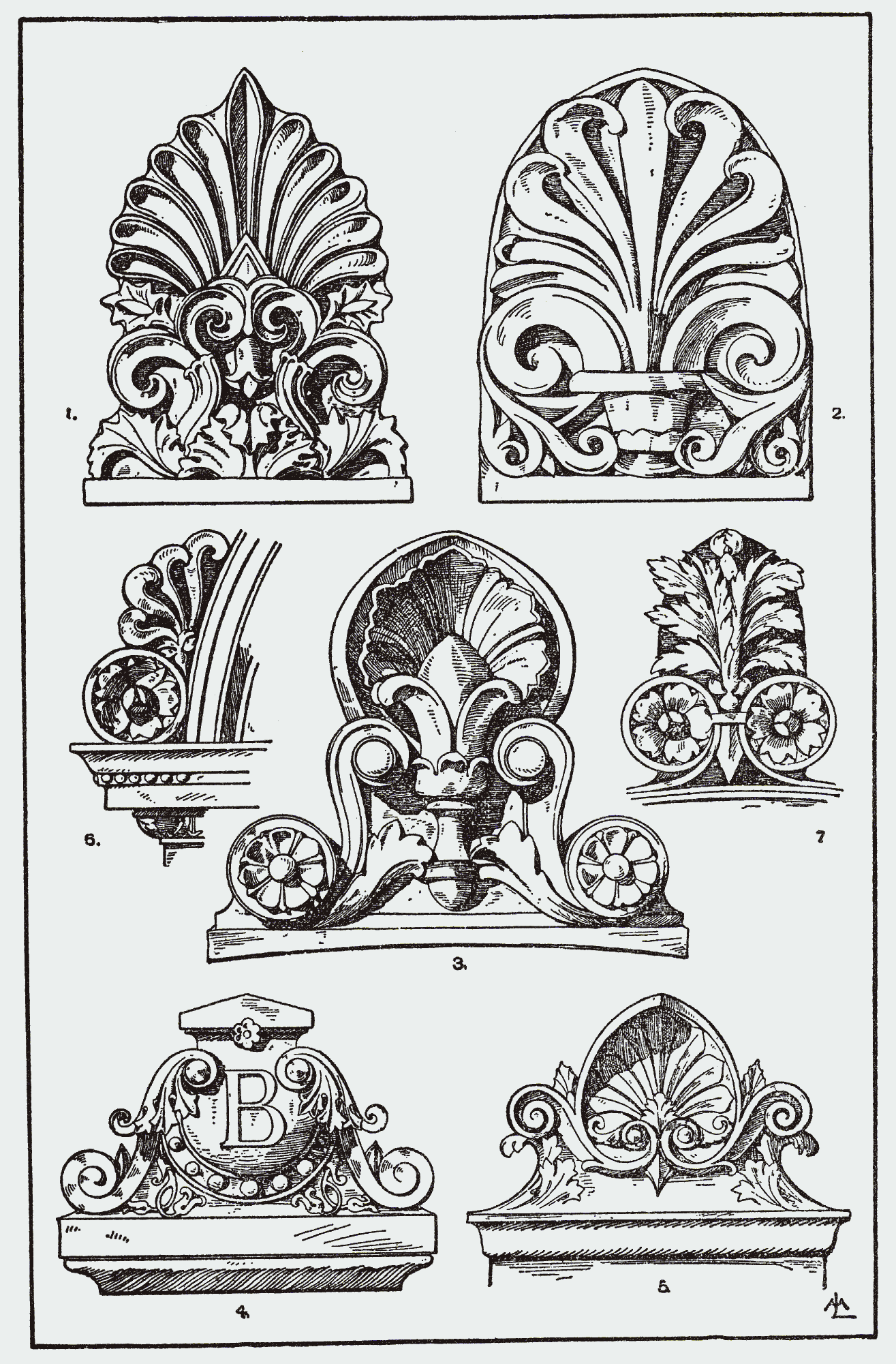 • possibly a method of construction used to obtain stability in mud walls.•the incised and flatly modeled surface adornment of the stone buildings has derived from mud wall ornamentation.

•the use of the arch was developed during the fourth dynasty, all monumental buildings are post and lintel constructions,

•flat roofs are constructed of huge stone blocks supported by the external walls and the closely spaced columns.

•Exterior and interior walls, as well as the columns and piers, were covered with hieroglyphic and pictorial frescoes and carvings painted in brilliant colors.

•Many motifs of Egyptian ornamentation are symbolic, such as the scarab, or sacred beetle the solar disk the vulture palm leaves, the papyrus plant buds and flowers of the lotus and Hieroglyphs were inscribed for decorative purposes as well asto record historic events or spells.

-The Obelisks symbolized the sun god Ra and it was believed that the structure possessed magical power and protected the temples and tombs.

-It is a monumental tapering column carved from a single block of stone.

-It was capped with a pointed top.

-The term is derived from the Greek word obelisks meaning “needle”.

-Procedure of building it was similar to that of pyramid.

-On each side of obelisk contains a line of hieroglyphic inscriptions containing the title of Pharaoh and praising the God was seen.

-Placed in pairs at the entrance of the temples associated with sun, also on some tombs. categorized as: (i) The outer chamber, in which were placed the offerings to the Ka or ” double,” decorated with festal and other scenes which are valuable from an historical standpoint.

(ii) The inner secret chamber, known as the ” serdab,” which contained statues of the deceased members of the family.

(iii) The chamber containing the sarcophagus, reached by an underground shaft.

The Niche or fake doors in these buildings had an imaginary purpose, were thought as a way that permitted the Spirit of the deceased, return to this world to obtain nourishment needed to keep living his Ka, and for such deeds, family members, close friends and other persons, brought offerings and celebrated specific rituals, for this purpose.

The niches were built in the interior or exterior of the building, having different forms and sizes that run from small window-like niches to a series of niches with emplaced statue, and diverse decorations that also reveal a position status; in some locations, replaced by the real door at the entrance of the mastaba by Niches, or added columns at to decorate the entry way, probably to indicating the level of privacy that they wished for. In some niches of these mastabas have at the one or two representations of the same person, either sitting or standing as guarding the entrance way, guarding or greeting the entrance door to his dwelling place in paradise in an imaginary place in the Sky.

The Mastaba of Thi, Sakkara

Stepped-pyramid of the 3rd Dynasty

Pyramid at Djoser at Saqqara

Valley of Kings of Ancient Egypt

Most tombs followed a similar pattern:

There were Five components of Egyptian temples

– These are the large gates of the temple, they consisted of two tapering towers, each surmounted by a cornice, joined by a less elevated section which enclosed the entrance between them
– The entrance was generally half the height of the two towers.
– Pylons were often carved and painted with scenes of the Pharaoh and gods with scenes emphasizing a king’s authority since it was the public face of a cult building.
– In front of the pylon were a pair of obelisks and statues of the Pharaohs.

– This was a large open Hall, which decorated walls showing scenes of the Pharaoh and the gods.
– It had a transitional purpose, serving as an interface between the outside world and the sanctified regions deeper within the temple.
– People were only allowed to enter the Outer Courtyard on festival days.
– Sometimes there was a second pylon leading to the Hypostyle hall deeper in.

– This is a large colonnaded hall entirely roofed except for the central aisle which was lit by windows,
– Scenes of religious rituals were carved into the walls.
– The capital of the massive column often in the shape of the papyrus Flower.
– This was considered the reception area of the god and accessible only to the priests and the Pharaohs were allowed to enter the hypostyle hall, which was used for religious rituals.
– Smaller side doors, intended for bringing in offerings led into small rooms

– The sanctuary was the most special and important part of the temple. It was a very dark and relatively small room.
– The floor sloped steadily upwards until the sanctum was reached, while the roof was lower
– Only the High Priest and the Pharaoh could ever enter the sanctuary.
– In the middle of the sanctuary stood the Naos with the statue of the god. The naos was made of wood, with doors that were kept closed and locked at all times except for at the rituals
– A temple could be consecrated to more than one god, but the Naos of the main deities was always situated along the main axis, and lesser deities were placed on either side.
If both deities had the same importance, than a double sanctuary was constructed along the main axis (like the one shown in the picture above)
– In close connection to the sanctuary there were other rooms for storage of the god’s belongings, jewelry, insignia and ritual tools.

-Archaeologists have excavated a number of these in temples of the New Kingdom.

-The priests used water from the sacred lake to perform rituals in the temple.