From a few days I am thinking about Delhi. Have you ever thought what makes Delhi more special and attractive for tourist? Historical monuments cover a large part of Delhi. Qutub Complex is the most visited destination in India only next to Taj Mahal. But in 2006 it was the most visited place, even beating Taj Mahal. So it is easy to imagine the rush and the crowd any given day. But once you go inside the Complex it is big enough to accommodate everyone. Designs on the walls and pillars are extravagant and lavish.

Qutub Minar is the tallest brick minaret in the world and an important example of Indo- Islamic architecture. The tower is in the Qutub complex in south Delhi, India. Qutub complex also includes a group of monuments : Quwwat-ul-Islam Mosque, the Tomb of Iltutmish, the Alai Minar, Alai Darwaza, the Madrasa or school. Qutub-ud-din Aibak built Quwwat ul Islam Mosque, to the north-east of Minar in AD 1198. The Tomb of Iltutmish (AD 1211-36) built in AD 1235. Ala-ud-din Khiji constructed Alai Darwaza, the southern gateway of the Quwwat-ul-Islam Mosque in AD 1311.

Ala-ud-din Khiji built a madrasa the south-west of Qutub Minar to impart religious education to the children. He also commenced the construction of the Alai Minar with the intention of making it twice the size of earlier Minar. It is  the north of Qutub Minar.

The construction of Qutub Minar was commissioned by Qutub-ud-Din Aibak), the founder of the Delhi Sultanate in 1193 AD.  Aibak’s successor Shams-ud- din Iltutmish added three more storeys to complete the tower.

Other than Qutub Minar, among the important monuments at the Qutub Minar Complex, New Delhi, is the Quwwat-ul-Islam (also spelled as Qawwat-ul-Islam, Quwwatu’l Islam) Mosque. Built by Qutub-ud-din Aibak, the Turkish slave-army commander of Muhammad of Ghuri , the Quwwat-ul-Islam (‘Might of Islam’) mosque. Work started on the mosque in 1192 AD to commemorate the victory of Muhammad of Ghuri the Afghani emperor, over the Rajput army led by Prithviraj Chauhan. On the western side, the mosque rests on the foundation of a Hindu temple, while of the east the plinth has been specially raised to support the monument. Work started on the mosque in 1192 and was ﬁnished by 1199 AD. Later emperors of Delhi – Shams-ud-din Iltutumish (1210-36 AD) and Ala-ud-din Khilji made additions to the original structure

An inscription at Quwwat-ul-Islam mosque records the demolition (using elephants) of 27 temples, the materials of which were used for the construction of the mosque. The Qawwat-ul- Islam mosque, with a rectangular plan, encloses a quadrangular court, which is at the centre of the monument. The rectangular platform measures 65.2 meters (214 foot) in length and 45.4 meters (149 foot) in width. . In 1199 AD, after the completion of the mosque, a large stone screen was erected on the western side. It consisted of a central arch, rising to the height of 16 meters (52 foot, 6 inches) and with width of 6.7 meters (22 foot). There are two more smaller arches, one on each side of the central arch, and with the same design as the central one.

Qawwat-ul-Islam mosque was extended twice by later emperors – Shams-ud-din Iltutmish in 1230 AD and by Ala-ud-din Khilji in 1310 AD. Iltutmish added the colonades, the beautiful screen arches and the prayer hall to and outside the existing structure. This ensured that Qutub Minar, which was till now outside the mosque enclosure, now fell within the boundary of the original mosque plan. The additions by Ala-ud-din Khilji doubled the area covered by the mosque. His extension included a gateway to the Qawwat-ul-Islam mosque called the Alai Darwaza (added in 1310 AD), and a college for religious studies: Ala-ud-din’s Madrasa. Ala-ud-din Khilji also added a competitor to Qutub Minar called Alai Minar, which is to the north of Qutub Minar. It was, however, never completed. Today it looks forlorn and sticks out as an odd monument in the Qutub Minar complex. Iltutmish in 1230 and Ala-ud-din Khilji in 1315 made additions to the building. The main mosque comprises of an inner and outer courtyard, decorated with shafts and surrounded by piller. Most of these shafts are from the 27 Hindu temples, which were plundered to construct the mosque. It is, therefore, not surprising that the Muslim mosque has typical Hindu ornamentation. Close to the mosque is one of Delhi’s most curious antiques, the Iron Pillar.

The Alai Darwaza is amongst the most perfect specimens of the architecture of the Delhi Sultanate especially of the Khilji dynasty. Built in 1311 AD, it was part of Ala-ud-din Khilji’s extension plan of the Quwaat-ul-Islam mosque on the northern, eastern and western sections. Alai Darwaza was one of the four grand gateways. A single storeyed structure, it gives an impression of being double-storied from outside.

The Alai Darwaza is amongst the most perfect specimens of the architecture of the Delhi Sultanate especially of the Khilji dynasty. Built in 1311 AD, it was part of Ala-ud-din Khilji’s extension plan of the Quwaat-ul-Islam mosque on the northern, eastern and western sections. Alai Darwaza was one of the four grand gateways.

This is probably the only unﬁnished monument in Delhi. Alai Minar believed to have come into existence since 19 century. It standstill in its position till today with its unﬁnished structure. Sultan Ala-ud-Din Khiljiis known for an oambitious emperor. It was due to his nature that he won manybattles. He wanted to build this monument as a sign of his victory. He wanted his structureto be so tall that the entire world know about the greatness and courageous nature of the Sultan.

The ﬁrst ﬂoor of the Alai Minais 24.5m high. Unfortunately after the constructruction of the ﬁrst ﬂoor Sultan lost his life and contruction of the Minar came to a pause. As per the tradition the Sultan’s successors supposed to look after this ongoing construction but failed do so. The Alai Minar shows the ambitious attitude of the Sulatan.

The Iron Pillar from Delhi 7.3 m tall, with one meter below the ground; the diameter is 48 centimeters at the foot, tapering to 29 cm at the top, just below the base of the wonderfully crafted capital; it weighs approximately 6.5 tones, and was manufactured by forged welding. 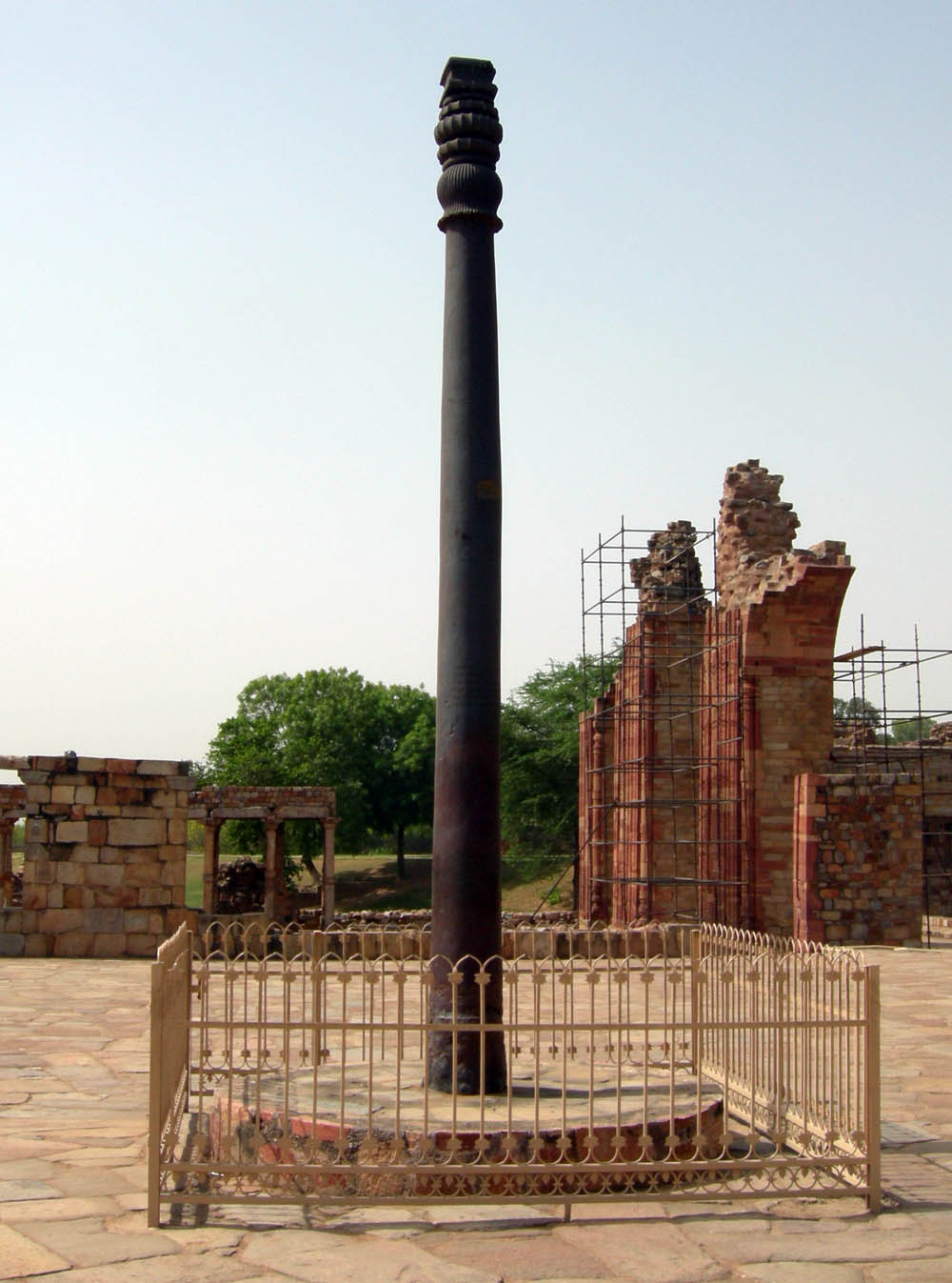 The Iron Pillar dates from Gupta King, who ruled from 375 – 413 AD Standing at the center of the Quwwatul Mosque the Iron Pillar is one of Delhi’s most curious structures. Dating back to 4th century A.D., the pillar bears an inscription which states that it was erected as a ﬂagstaff in honour of the Hindu god, Vishnu, and in the memory of the Gupta King Chandragupta II (375-413). How the pillar moved to its present location remains a mystery. The pillar also highlights ancient India’s achievements in metallurgy. The pillar is made of 98 per cent wrought iron and has stood 1,600 years without rusting or decomposing. 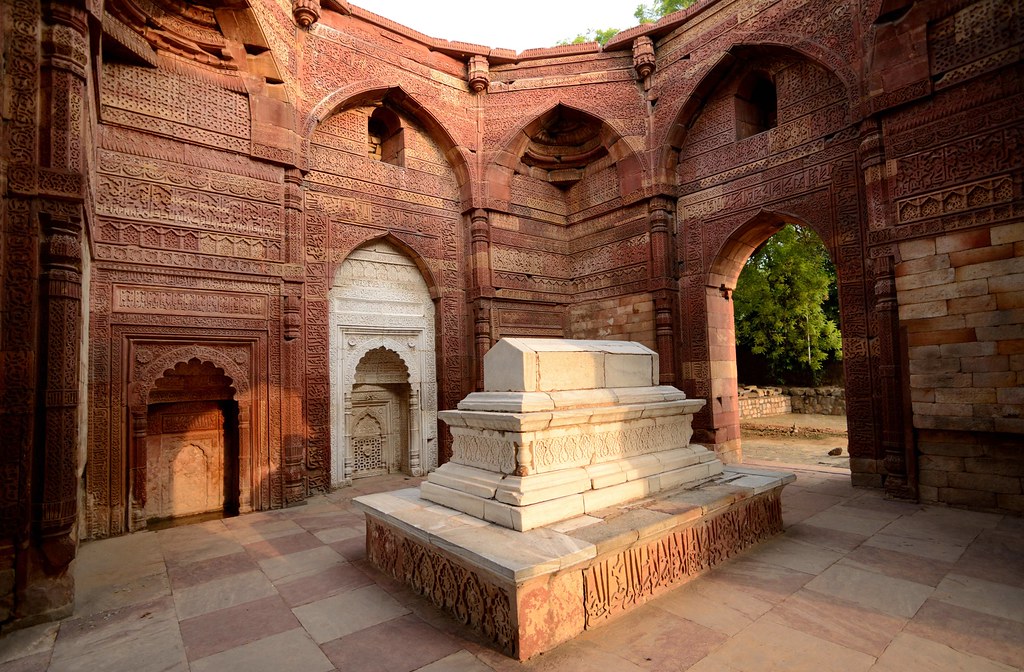 Built in A.D. 1235 just outside the Quwwat-ul-Islam mosque. A compact square structure of 42′ side with entrances at three sides and western wall enclosed to accommodate 3 miharabs. Exterior is relatively plain, but interior is richly decorated. A square hall of 30′ side, its walls are relieved with white marble insertions. Quranic verses in Kufri, Tugra and Nashtalik characters with geometrical patterns interspersed. Most of the roof has collapsed, but remains show it to have been a shallow dome composed of concentric rings of masonry which collapsed due to excessive span. The most interesting feature is the ﬁrst appearance in India of the ‘Squinch’. This consists of projecting a small arch across the upper side of the corners of the square room, turning it into an octagon, then repeating the process to turn it into a 16 sided base in which a dome can rest. In this case, the squinch is a half-dome, though built on the corbelling principle. Thus, this is an Indianized version of the squinch.

"TRAVELLING it leaves you SPEECHLESS then turns you into a STORYTELLER"
Follow archiHUNGER on WordPress.com
Loading Comments...