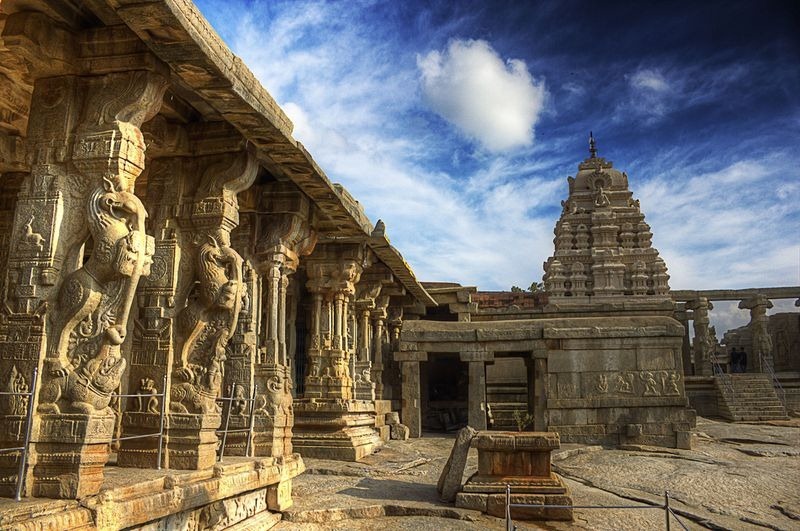 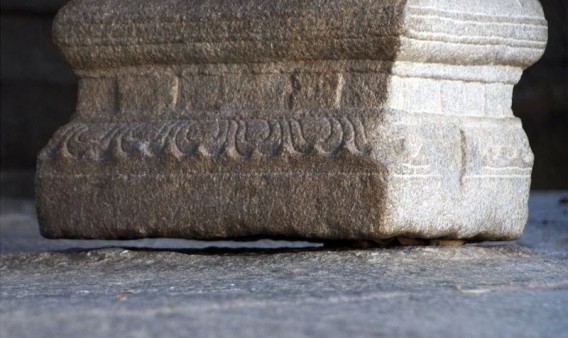 Dating back  to 1583, carved  out  of a low rocky  hill called Kurumasailam, the Veerabhadra Swamy Temple at Lepakshi, transports you back to the Vijayanagar era.

The otherwise hurried footsteps slow down once you are inside this temple. And as the temple priest’s voice starts filling your ears, you are back in time instantly. “This is the place where the bird Jatayu fell after a battle against Ravana, who was taking Sita away to Lanka. When Lord Rama reached the place and saw the bird wounded, with compassion he said to it, ‘le pakshi’ (arise bird) in Telugu and hence, the name Lepakshi was given to this place,” the priest explains.

Its significant mention in the mythological epic Ramayana is perhaps just a small bit of the history the temple bears. A reference about its significance is also made in ‘Skandapurana’ as one of the hundred and eight important

‘Shaiva Kshetras’ (shrines). Located about 500 kms from Hyderabad, Lepkashi is a small village 15­km east of Hindupur in the Anantapur District. The main structure of the temple is built on a hill called Kurmasailam (tortoise hill) in Telugu, after the shape of the hill. Though Sage Agastya is believed to to have built the temple itself, it was supposedly constructed by Viranna and Virupanna, the Vijayanagara governors of Penukonda. Virupanna was also the treasurer in the mid­sixteenth century. The residing deity of the temple is Veerbhadra. However, the temple also has shrines for Vishnu and Shiva, Bhadrakali and Ganesha.

This masterpiece of art work was sculpted by Vishwakarma Brahmin stapathis in the Vijayanagar style of architecture,  who  took  about 45  years  to  build  this. This  exquisite  shrine  is a  treasure  trove  of magnificent sculptures in the intricately designed mandapams and over 70 pillars stand as the backbone of this temple. The temple   hosts   a   Rangamandapa,   Garbha   Griha,   an   incomplete   Kalyana   Mandapam,   a   sculpture   of Nagalingeshwara, a small Ganesh shrine, an inscription of Sri Kala Hasti, a swing pavillion and Ardhamandapa.

The pillars bear sculpted images of gods, dancers and musicians in perhaps the most unique “bhangimas” (poses) that one tends to get lost in each of them. One also gets to witness the “Hanging Pillar”­­ an engineering genius by the medieval India’s temple builders. An astounding fact about this pillar is that it is dislodged from its original position. The priest demonstrates this by passing through a cloth or a paper from one end of the pillar to the other. It is said that this is a result of an unsuccessful attempt of the British to demolish the temple.

As you walk out of the Garba Griha, you will be awestruck by the beauty of the Kalyana Mandapam (wedding hall). People believe that Shiva and Parvati got married here. Further down the mandapam, there is a Ganesha idol leaning against a rock perpendicular to which is a massive Nagalingeshwara, with three coils and seven hoods, sheltering a black granite Shivalingam.

Also to notice are two red blotches on the western wall of the inner enclosure of the temple and they are said to be the marks left by the bleeding eyes of Virupanna, who was accused of funding the construction of the shrine, without the king’s permission. Legend has it that he forestalled the king’s punishment by plucking his eye balls and throwing them at the wall. A couple of miles away from the temple is a huge granite Nandi, carved out of a single stone. Reported to be India’s biggest monolithic Nandi, the structure is 27ft in length and 15ft in height.